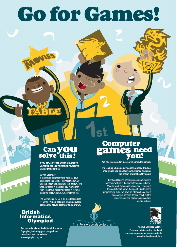 BIO 2006 took place February - April, 2006. The competition was open to all students in full-time pre-university education in mainland Britain, and involved solving problems against the clock, using nothing more than pen, paper and a computer.

The BIO consists of three stages. The first is a 3-hour test, the British Informatics Olympiad, which took place in schools during February-March 2006. This involved solving a range of problems using a computer. The second stage was the final, held in Cambridge from 31 March-2 April 2006. The top four finalists made up the team to travel to the 2006 International Olympiad in Informatics, hosted by Mexico.

As well as the possibility of winning a medal - our competitors won over twenty in the last ten years, including four golds - the team enjoyed VIP treatment and get to socialise with contestants from over 75 different countries that will take part.

See the links below for information about BIO 2006.